Stages of pandemic employment: Who left the workforce early, and who is out of work now?

Following the nationally-declared emergency and global spread of COVID-19 in early 2020, the United States experienced its highest unemployment rates since World War II and possibly since the Great Depression. In addition to unemployment, the pandemic spurred a widespread surge in labor force non-participation—people who are not employed, not claiming unemployment, and not looking for employment opportunities.

We used unemployment and labor force participation information from the Bureau of Labor Statistics’ current population survey estimates to investigate how employment in North Carolina has changed, and for whom. 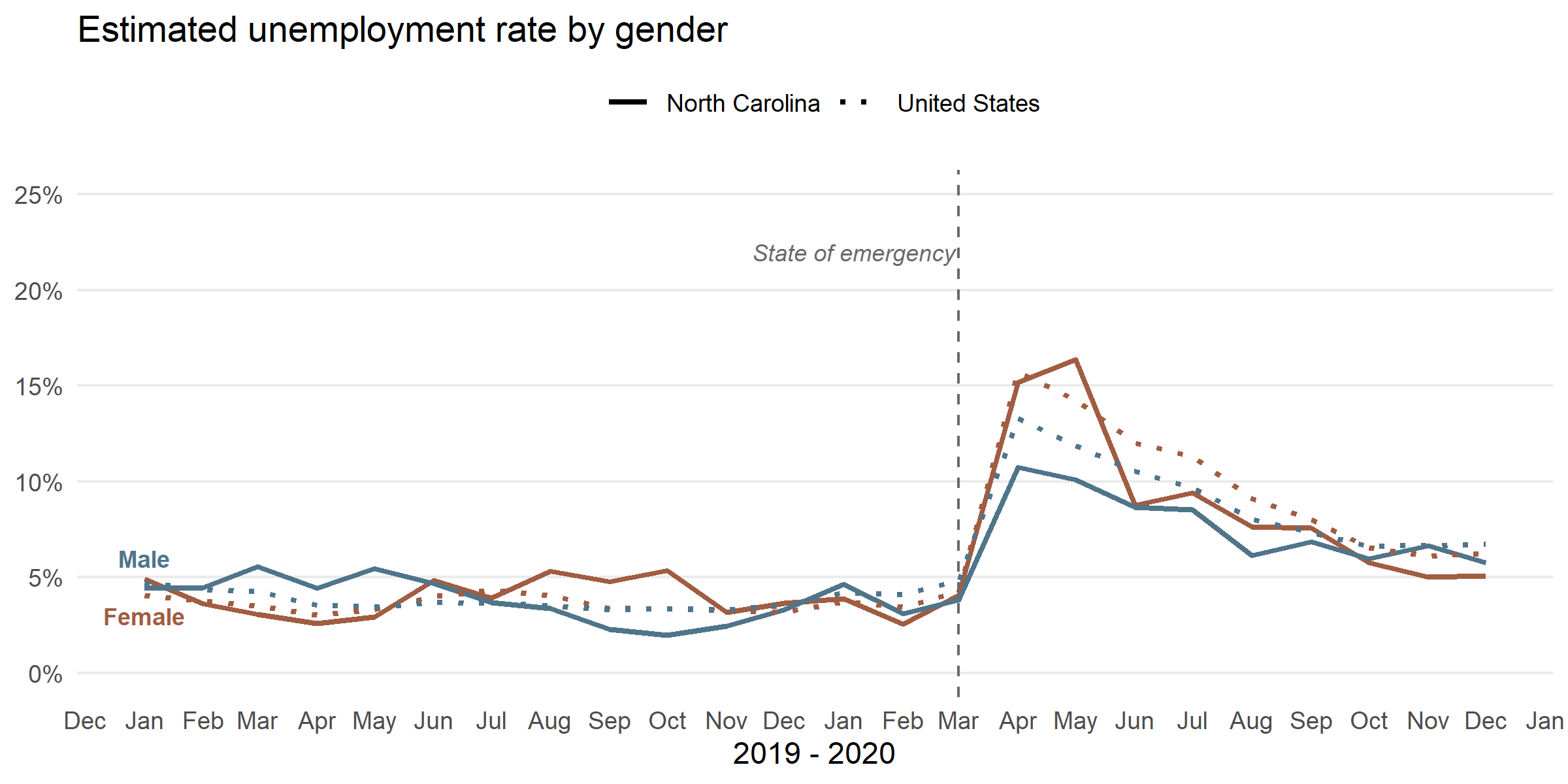 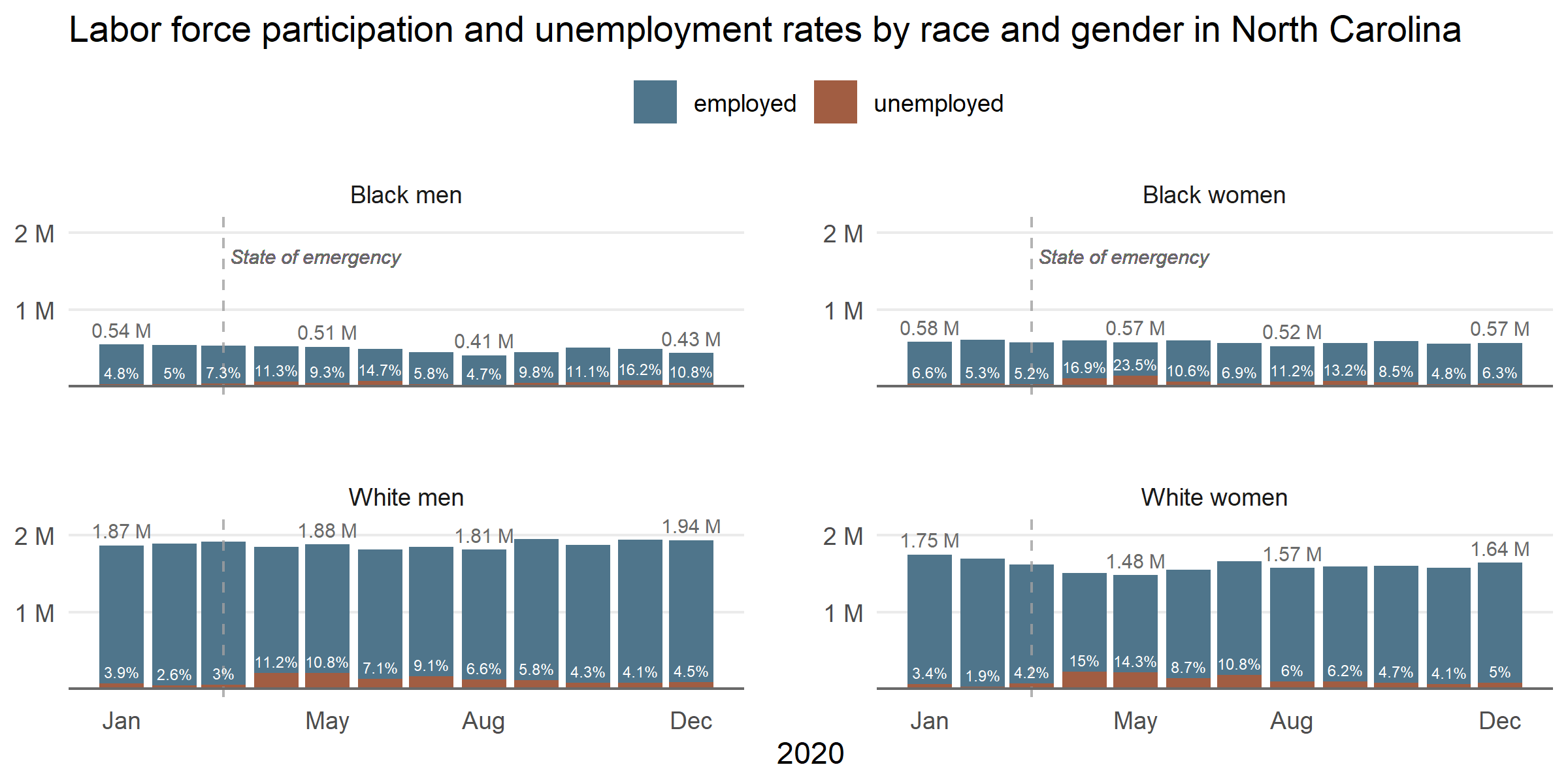 Black men experienced an even more dramatic reduction in labor force participation than white women, with approximately one in five black men leaving the labor force by the end of 2020. However, this exit did not occur in the early stages of the pandemic as it did for white women. Black men were the least impacted by the early unemployment spike in April-May 2020, but they did not experience the subsequent employment recovery that occurred over the summer and fall for white men and women of all races.

Instead, Black men experienced high unemployment levels throughout the remainder of 2020, which was interrupted only by a dramatic temporary dip in July-August. (White women and men also experienced a dip in unemployment in August, which may be attributable to the end of $600/week federal unemployment benefits that expired on July 31.)

Overall, the estimated number of employed Black men in North Carolina has declined from almost 520,000 in January to less than 390,000 in December, with 85% of that decline attributable to leaving the work force entirely. This smaller denominator again results in a higher unemployment rate, but in the case of Black men the unemployment levels have also remained high, resulting in unemployment rates twice the rate for white men by the end of 2020.

This analysis does not incorporate information about under-employment—for example, reducing hours, accepting pay cuts, or seeking and accepting jobs for which they are over-qualified. It also does not address individuals’ reasons for maintaining unemployment versus leaving the workforce entirely, which could include the relative benefit of (and difficulty of obtaining) unemployment benefits, the presence of savings or other income sources, unpaid or informal labor demands like child and elder care, desire to avoid exposures to COVID-19, and many others.

Finally, these patterns may also be associated with income, occupational sector, family composition, and other factors in addition to race and gender. State-level sample sizes are too small to draw meaningful conclusions about other racial and ethnic categories beyond Black and white workers, but the Pew Research Center conducted similar national-level analysis of long-term unemployment.

However, the statewide labor force information from the Bureau of Labor Statistics does portray clear differences between the early and later stage impacts of the pandemic on North Carolina employment in 2020:

These patterns will continue to evolve; preliminary data from January 2021 suggests that the employment decrease for Black men is continuing into the new year.

This work is licensed under a Creative Commons Attribution-ShareAlike 4.0 International License.